On Sunday June 26, the Relay for Life's Team Sunbeamers held a joint event with another Relay team, Mel's Maniacs. The event took place at Club Amarantha, on the sim of the same name, lasting from 3PM to 5PM SL time. The majority of those showing up were from the Sunbeamers, but there were a number from the Maniacs as well. The other team was named in honor of a friend whom passed away from cancer in 2011, this season being their fourth. 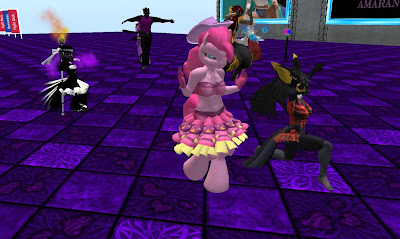 Rita Mariner the Sunbeamer leader was there in her anthro "Pinkie Pie" pony avatar, her second avatar as part of her "Bid Me Pink" avatar challenge. As one can see in this screenshot, she still isn't thrilled about being in pink.

Dusk Griswold and Skylark LeFavre Djed for the first hour, and the crowd enjoyed the tuns, danced and joked a little. At one point, someone mentioned the word "bacon," and it started dropping from some contraption from the ceiling, "Did someone say BACON?" That got people saying "bacon" over and over again just to get it to drop more of the "meat candy," littering the ground with it.

The event would raise several thousand thousand Lindens, which was split among the two teams. 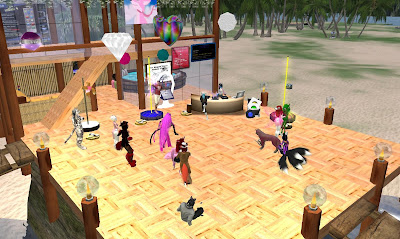 On Tuesday June 28 at 6PM, the Happy Vixen Beach club held a special event for Team Sunbeamers: a tribute to the noted late member of the Sunweaver Estates Artistic Fimicould, whom had passed away from cancer several years ago. Every year, the Sunbeamers, and before them the old Passionate Redheads. "I Relay for Fimi" became a tag worn by a number of members. Held every year, the event is usually held in late May around the anniversary of Fimi's death. But complications moved the event up a month. 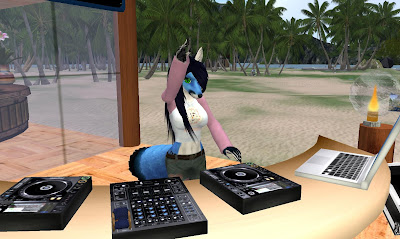 This is a Journey Into Sound with DJ Tantari.  Tonight's Journey is Pink Fox - written for Artistic Fimicoloud, aka Stephanie Koslow.  We lost her to cancer in 2008.  The search for a cure goes on in her memory.  Never give up!  Never give in!

DJ Tantari played a new music set of hers, "Pink Fox," in honor of Fimi,whom was known by her pink vixen avatar. Tantari commented that she had put the set together in less than two days. Usually compiling a two hour set of tunes takes longer. So for two hours, various tunes were played, some about pink, foxes, and other subjects. She ended her set with one particular song: "Goodbye."

At the end, Tantari thanked everyone, "Thank you all for coming here tonight.  And tuning in.  And remembering with us."

As the Relay teams continue to hold events, they are also getting ready to build their camps on the Relay track, of which the sims have just been rezzed but have limited access only to a few of the Relay volunteers, such as the captains of the teams which have camps there, and the builders. The Relay Walk, also known as the Relay Weekeend, is on Saturday June 23 and Sunday June 24.