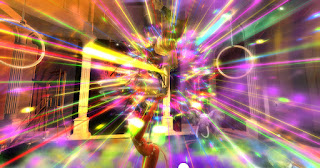 KT Burnett (KayT Resident), whom recently started a new Second Life blog "The Digitized," posted a commentary "SLB13: Right and Wrong" about what she felt what went well, and sometimes better, with the Birthday celebration, and a few things that could be improved on.

Among the pluses were the freebies and always having greeters at the Welcome area, separating the event into a busy week of events for those who love activity and crowds, and a more relaxed week (which in the past was as short as a couple days) in which residents could leisurely explore the exhibits with the crowds gone, and the Lindens at both the "Meet the Lindens" events and "dragging the Lindens in front of live audiences" which she felt "this had been something the community needed so badly – the feel that Linden Lab has not deserted Second Life, that they care, that they take interest in what’s happening on the Grid."

Such a big event inevitably has things going wrong. And among the minuses, in her opinion minor inconveniences, were that most performers did not put on a show that was significantly different from their usual performance, many exhibits were challenging to photograph (something I can relate to), and that she wondered if some exhibits could have done a better job in reflecting, or speaking about, the community they came from. 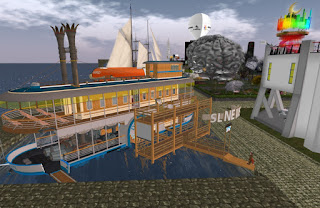 In the case of the Second Life Newser's exhibit, we've had an interesting challenge: what kind of exhibit represents a newspaper? The settings of our stories change with the locations. In the past,we've had office buildings. But after a while, we were soon asked to come up with something different. When our friend Silvia Ametza offered to build us a 19th Century style riverboat, that in my opinion would fit in a cowboy adventure, we went for it. Since we have a couple cartoons every week, it was suggested we put some up, so we did in the form of a slide show. And in the end, it worked. The exhibit got a number of complements from people who saw it.

What we'll build next year, well, that depends on the theme. Unless real life decides to throw a real humdinger of a monkey wrench at us, the Newser will be there.