Tragedy: Memorial to the Fallen of Nice and Paris 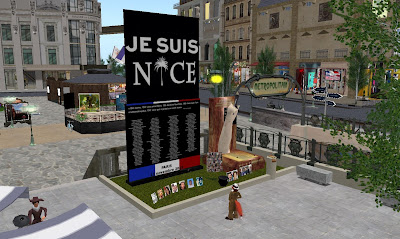 While much of Second Life was busy celebrating the Relay Weekend, there was a small corner with a memorial for a recent tragedy. On Thursday night local time, July 14,  in the French city of Nice, a large truck plowed into a crowd of people whom had gathered to enjoy the Bastille Day celebrations. The result was over eighty people crushed to death and over three hundred hurt before local police killed the terrorist, a Tunisian delivery driver with a criminal record including one previous charge of assault. While he had no known connections to any group, the ISIS terrorist organization has claimed credit for the mass-murder.

In the Paris 1900 sims a memorial was set up for the victims in this attack, and two other acts of terrorism last year. There was a list of names of the 130 whom were killed in a number of attacks on Friday November 13 in Paris France, and a hand holding a pencil with a list of names of those killed in the attack on the Charlie Hebdo magazine on January 7 2015. One could pick up a small copy of the small Charlie Hebdo memorial. 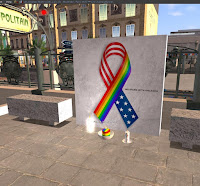 Earlier,  there had been a picture of a ribbon, a combination American flag and rainbow with the caption "We stand with Orlando," a reference to the terrorist attack on the attack on the Pulse nightclub last month. Beneath that were a few candles, one with the display, "Please allow peace." There was also a Belgian flag, possibly referring to the bombings in Brussels in March 2016, all of the attacks linked to Islamic extremism.

This marks the third time in a year and a half the Paris 1900 sims have been the location of memorials, the previous two for the attack on Charlie Hebdo and the November 2015 attacks.