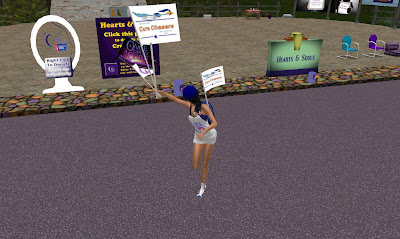 Yesterday marked the second half of the Relay Weekend, also known as the Relay Walk, marked by 24 hours of walking across a track across almost 40 sims. In the pre-dawn and early morning, the Relayers continued to walk the track. Some had taken breaks to sleep, but a hardy few continued on without so much as a nap. 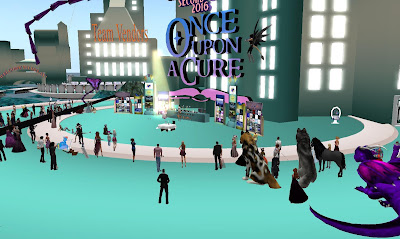 At 10AM were the official closing ceremonies.  Committee members thanked the hundreds whom had taken part, large and small, as well as recognizing certain individuals whom had made special efforts. There were also some team awards given out. There were also reminders of why the struggle continues, stories of people who had survived their battle with cancer, and of people who had not. 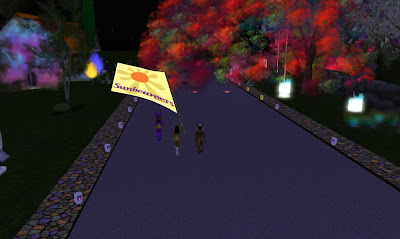 Among the teams getting awards was Team Sunbeamers. They had received the Cancer Education Awareness Award: 1st place. Since it's creation, the team had earned awards for fundraising, but not for it's campsite. This time it had. So when it walked the Victory Lap following the closing ceremonies, marked with fireworks at certain locations on the track, it did so with Cynthia Farshore, one of the builders of it's award-winning camp, it's flag flying high. 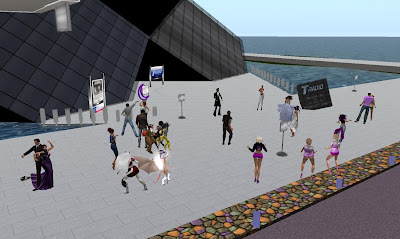 After the victory lap was an impromptu event at the T-1 Radio location. And a number of people whooped it up. While there might not have been a "skunknado," at one point a thirty foot woman showed up. 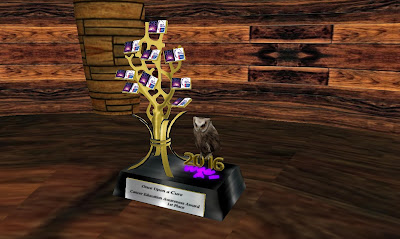 Members of team Sunbeamers would later get copies of their award. Also given out were teamwork awards, and awards for completing at least one lap of the Relay Track. Cynthia Farshore would get the "Rabbit Award" for making more than ten laps.

The SL Newser will display more pictures of the track later. For those who can't wait, IshtarAngel Micheline has a few up on her Flickr, of both the ceremonies, and of the track.

*Addition*  - the sims will remain up until at least late Wednesday night. While no date for the "flood party," a recent tradition for the Relayers, has been given yet, it's often on the Wednesday afternoon following the Relay Weekend.