News and Commentary: Update on JP Laszlo of the Trump Organization


It was a few weeks ago in which JP Laszlo and several other members of the Trump Organization, the most well-known of the groups in Second Life promoting US Presidential candidate Donald Trump, were banned from Second Life by Linden Lab. The Lab also closed the group's sim, "The Wall." The group had a short but controversial history in Second Life. Members of the group erected a "Trump Wall" next to the Sanders HQ, towering over it, and they were blamed for a number of griefing incidents there and other places on the Grid. 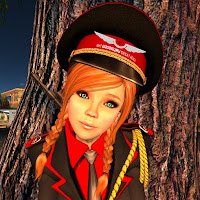 Since the banning, little has been heard from JP Laszlo that the Newser is aware of. On the group's Facebook page, they mentioned there's been no response to their ban appeal. On his Twitter, JP changed his name there to "JPizzers" and posted a picture showing a girl in a Russian uniform with the words "Make Woodbury Great Again," a reference to an area in Second Life that had a reputation for harboring griefers which was eventually erased by Linden Lab and many of it's group banned.

As part of the Trump Organization, JP insisted they were not griefers, but called what they truly did pranks which they felt the Sanders group overreacted to, saying the incidents of outright griefing were not his doing. But JP's adoption of the Woodbury name compromises his claim and provides ammunition to those who blamed Trump-themed griefing attacks on him. JP's critics included Hamlet Au of New World Notes, whom felt their sim was taken down due to the huge black eagle design visible on the map resembled a Nazi symbol.

Hamlet Au would go on to call the Trump Organization an example of Second Life imitating real life, comparing them to the Presidential campaign they claimed they supported, "in this case, they're actually less troll-ish than their real life counterparts -- who are literally drawing on images and memes from trolls in the online realm in order to troll the entire world." But unlike trolls in Second Life, which are close to universally disliked by the residents, Donald Trump enjoys the support of much of the US electorate, seen by many working-class Americans as their champion. This week at the Republican Party's convention in Cleveland, he officially became their nominee for the office of President of the United States,giving a long acceptance speech. While this may be the last we hear of JP Laszlo, Trump will dominate the headlines of real life news for the next few months, possibly for the next four to eight years.