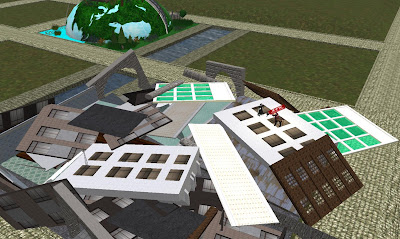 July 6 was the last day the sims of the Second Life Birthday were still up. The majority of exhibits were taken down by then. This one by Levi Clownski (israel.schnute), Lapar's "Big City," had just been demolished as I had gotten there, "Well, it was a big city, now it's the ruins. We had a depot and a hotel. ... If I had known it would be so spectacular, I would've make a notice." 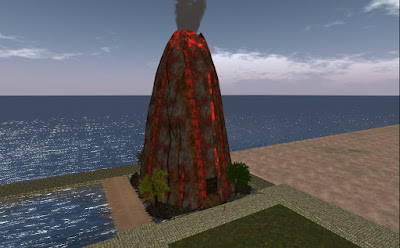 Among the few exhibits still up was this volcano. It had a small ride, "Epi's Adventure" by Baron Jiminy (Jimc Jiminy). which took residents on an underwater pod ride through an ocean area. It had a free scuba-diving outfit for those who clicked on the giver. 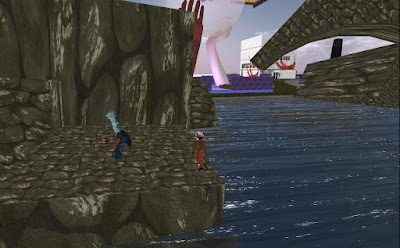 Pygat Bu had the job of demolishing the stonework the water exhibits were on. As I stood next to him on an arch, the rock collapsed all around me, "Don't be alarmed if you're hit by a flying road or two, deleting them now." I soon ended up in the drink and had to swim to shore. Pygar, with his wings, just flew off.

There were a few others around. Some had cleaned up their plots at the last moment, "Hi there guys. I grabbed all my stuff. Is it safe to leave this group now?" Others were going to wait, "Well, will stick around for that. Should only be a half hour before it's all said and done." Diana Fire (Diana Renoir) joked, "Oh wait, we're having a drawing to give away Bixyl's hat in this group." 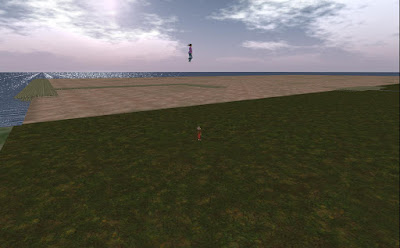 I saw Marianne McCann fly above me, "Here, watch this." And exhibits around me began vanishing, as well as the roads. "Go Team!!  We cleared 12 regions in less than an hour!" "It's like my Mom used to say about holiday dinners....'takes weeks to prepare it, and moments for it to be over.'" 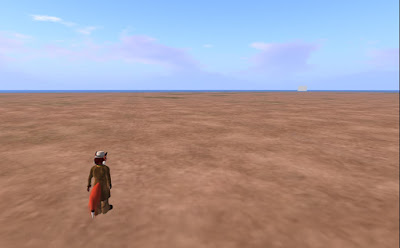 "Naked I came unto this world, and naked I will leave." to paraphrase a quote from the Bible, and so it was for the sims of the Second Life Birthday, which were soon bare before finally closed to exhibitors. The sims will likely fade into the virtual nether today or in a day or two, at least until next year. The SL13B was truly over.

"Look to the future!" Marianne posted as what is likely to be the last group notice, "Don't think of this as the end of SL13B, think of it as the start of SL14B! It's only months away!" others gave their comments, "I just want to thank all of the exhibitors, especially those in Wonderous, as well as the musicians, DJs, and all of my fellow volunteers for a great birthday celebration!" "Thanks to all it was a wonderful adventure. To feel good. See you next year." "Thanks to all for the wonderful Birthday, I hope to see you next year!" "(It) has been a pleasure to be (here) this year also, all people great, charming and nice. Spaces interesting, full of adventures. I think the topic was fulfilling. Thanks for letting me participate." "Thank you all so much! I had a blast at this birthday event...my first as an exhibitor. I'm already full of ideas for 14!" "Thanks for being a part of the biggest party on The Grid!"

"Thank you everyone for a great SL13B. See you next year."