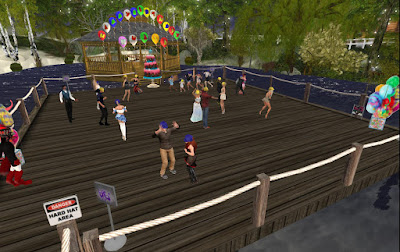 On Sunday August 16, a party was held at the Arinultra Cay sim. The occasion, the real-life birthday of Nuala Maracas, one of the co-captains of the Relay Rockers team for the Relay for Life of Second Life.

Trader Whiplash-Ballinger, also of the Relay Rockers, DJed the music for the party. Hard hats were passed around, and there were a number of well-wishers from others in the Relay, such as some of the "Roos With a Dream" team whom danced in a line next to the birthday cake display.

The party was held in a pier in the middle of a lake, away from the beach. Trader would say that the sim had been undergoing some renovations, the "Legacy" club, which had been the club for T-1 Radio, being no more. During the terraforming of land a "Relay for Life Relic" was discovered some days ago and sent to the Relay museum.

So what will take the place of the "Legacy?" We'll likely know soon.

Addition: The new club will also be called "The Legacy." But it will be a brand new building.  The "Grand Re-Opening" party will be on Wednesday September 16