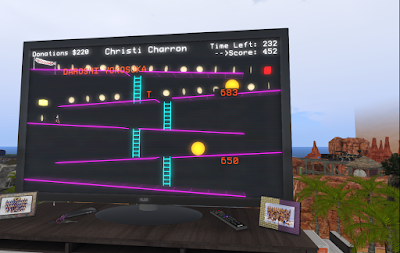 There have been some years the Relay sims were up after the weekend until Friday. But sadly this year isn't the case. Today is the last day to get a chance to take a look at the various sims and team campsites, such as the Second Life Cheerleading Squad's, which had this fun playable tribute to Donkey Kong at RFL Promise (166/160/23).

But before the camps are taken down, there's a Relay tradition to take place, the Flood Party, which starts at 3PM.

Join us for one last time on the Relay Regions and Track!

Wrap Up Awards will be announced During The Party
Listen Live on https://RelayRadio.t1radio.com

Bring A Floatie and Dress To Get Wet!

After the event concludes, teams are given the go-ahead to start taking down campsites.

Addition: As the Flood Party was starting, we heard from Linden Lab that the sims had a few more days. Unfortunately, some people, presumably mostly those who would be busy tomorrow, had already taken their camps down.
Posted by Bixyl Shuftan at 6:01 AM