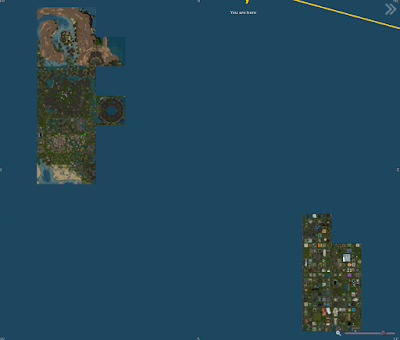 The Second Life Birthday is almost here. After the exhibitors have been building for weeks, the sims for the exhibits have been temporarily closed as the moles and volunteers do their inspections and will lift them tomorrow so the builders can make any needed last minute changes.

As you can see, for now the twenty-one sims that make up the grounds of the SL17B have been split into two groups, the seven exhibitor sims just southeast of the main group, which has the auditorium and stage(s). But they will be combined before the whole area is officially opened. Exactly what's in the Linden build area is speculation, which cannot be confirmed yet. As for the exhibit sims, we can't show as much as a tree outside the resident builds. So pictures there will have to wait as well.

Addition: The Second Life Birthday celebrations will officially start at 11AM SL time on Friday June 19, with the opening ceremony by Patch Linden.
Posted by Bixyl Shuftan at 6:02 AM