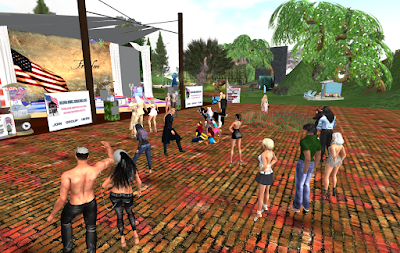 On Sunday May 31, Veterans Isle held it's monthly benefit concert. The event with several performers, organized in part by guitarist Frets Nirvana, raises money for Homes For Our Troops, a charity that builds or modifies homes for disabled veterans.

The event started at 4PM with DJ Waya Snowpaw. Starting at 5PM were the live musicians, begining with Quartz (Qqquartzzz Resident) who took to the stage with his piano. At 6PM, Sassy Nitely had her turn in front of the crowd. Vinnie (Acoustic Rhapsody) sang at 7PM, while wearing a safety mask. And last but not least at 8 PM was NeoMaximus Brandenburg took turns on stage.

As each musician performed, people donated money to house-shaped kiosks on either side of the stage, G J  (GJackie Winkler) cheering them on as they did. On occasion, Frets or someone else would challenge the crowd to donate a certain amount, then match it when all the cash came in.

By the time the last person left, a total of 184,037 Linden dollars had been raised.

Veterans Isle usually holds it's charity event on the last Sunday of each month, though occasionally will hold it a week early, usually when a holiday is involved.

To learn more about Homes for Our Troops visit https://www.hfotusa.org .