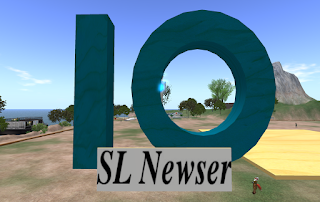 Ten years ago, Second Life was a different place.

It was a somewhat larger grid, the long slow decline in the number of sims having only just started. Mesh was not yet around, aside from under development. The classic Linden viewer was being retired in favor of the less than popular Viewer 2. The largest third-party viewer at the time, Emerald, got in trouble for one of it's team using computers with the viewer to launch a DoS attack on a critic. Teens were not yet allowed on the grid, having had their own, but it would be announced that next year older teens would be allowed in certain sims. "SL TV" was still a thing, with people viewing televised programs via  Treet TV instead of just Youtube. And there was a sense Second Life was in trouble. It was clear it's glory days from a few years earlier were gone, and Linden Lab would end up laying off a third of it's staff and would see two changes at the top as M Linden stepped down as CEO and Philip Linden would be interim CEO for several months, only to step down near the end of the year. With these events, there were rumors the Lab was looking for an investor or even to sell Second Life.

In the middle of all of this, the leading newsletter of the Grid, Second Life Newspaper, would close it's doors. Four of it's reporters, Shellie Sands, Grey Lupindo, Gemma Cleanslate, and myself, Bixyl Shuftan, would start our own, the Second Life Newser. We were anxious, and a little afraid as a new business and media starting out. And while Second Life's troubles gave us plenty to cover, bad news was still bad news as we were a little anxious about if there would be a Second Life to write about in the future. But as time went on, it gradually became clear Second Life would continue, probably more due to the devotion of it's fans than the guidance of Linden Lab which while making some fancy new options such as mesh, it could be clumsy and heavy-handed at times.

Our motto is that we cover the people, places, and events across Second Life. And we have, notable personalities, popular locations, and major happenings. But we've also made an effort to put the spotlight on little-known people whom did something of worth, interesting places off the beaten path, and noteworthy small events that deserve more attention. Over time, we've covered changes in this virtual world, such as the development of mesh and animesh. And we've reported on events such as the Relay for Life which show the good virtual reality can do for people.

Over time, we've also attracted sponsors. The Sunbeamer community was with us since the beginning, giving us a place for our office (Ranchan Weidman, whom provided both the land and office). Not long afterwards come our first cash sponsor, Podex Exchange, which remained with us for years, and were the subject of funny advertorial articles until sadly changes in Linden Lab's terms of service closed them down. But by then we had found others, such as Farshore Radio, Lorena Chung Estates, and Montecito Bay. The Deathlands are our newest.

A few other publications have gone for quick readership by writing heavily about controversy, such as drama and unproven rumors. As a friend with experience in real-life media put it, it's much easier to sell a controversial story than a constructive one showing people doing good. While the Newser occasionally writes about controversy, such as unpopular (often justly) moves by Linden Lab and the occasional troublemaker, we do not do so for it's own sake. Nor do we go around looking for troublesome topics. Eventually one important enough to write about will make itself known. And in the meantime, there's always plenty to write about that the readers would like to know. Nor do we try to tell people what to think. Our policy is to present the facts as we see them, and let the readers think for themselves. And if we're presenting our opinion, we do our best to make it obvious that's what it is.

Over time, the Newser has been the workplace for many fine and talented writers. DrFran Babcock, Any1 Gynoid, Grease Coakes, Xymbers Slade, Mylie Foxclaw and many others have made their mark. Sadly, most have had to step down as real life demanded their full attention. Besides myself, only Gemma Cleanslate remains of the original crew. We do miss them. But thankfully good reporters continue to apply. We're always open to new talent.

So what does the future hold? In 2010, Second Life's future looked a bit iffy with the Lab having to lay off a third of it's staff and a number of other moves that gave the impression of going for the short-term buck at the expense of the long term. Today, it's fairly clear the virtual world should be around for years to come. It's biggest threat seems to be in real life with the struggle against a pandemic resulting in economic troubles that could very well cause many of it's userbase to stop or cut back on their spending.

So the news will keep on coming, and we'll do our best to bring it to you.

Special thanks to JamesT Juno and Dana Vanmoer for showing us how a newsletter in Second Life should be done, to Linden Lab for making this virtual world possible to begin with, to our sponsors for funding our efforts over the years, and of course you the readers without whom this publication wouldn't be possible.