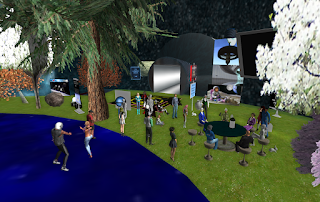 On Saturday May 30 was a momentous day for America's space program. The SpaceX Falcon rocket carrying two US astronauts, Doug Hurley and Bob Behnken, launched from the Kennedy Space Center near Cape Canaveral.

The last such launch was the final mission of the Space Shuttle program, the Atlantis going up on July 8 2011, and landing two weeks later on July 21. That would be the end of the American manned space program for nine years, NASA having to pay Russia to send US astronauts in it's rockets. NASA decided to partner with private companies to get men into space again. 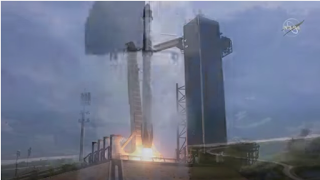 In Second Life, a group had gathered at the National Space Society sim, numbering over thirty at some points. People cheered as they saw the rocket lift off, both on the inworld screen and online in places like Youtube and broadcasts in Space.com and other websites. They saw the rocket go up, separate, and the Dragon capsule go up into orbit as the reusable first stage touched down. 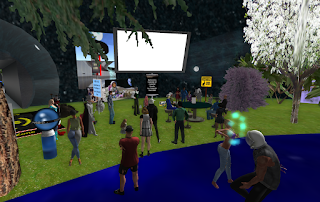 "When I was a child I watched rockets launch in Florida with my grandparents." one woman spoke, "this is amazing to relive that feeling." "It looks so high tech compared to the Mercury Capsules," commented another. A third remarked, "Wow, my stomach had butterflies, I can only imagine what they're feeling!" A fourth felt mixed feelings due to what she felt were lost opportunities, "I resent certain political and corporate forces leeching onto the space program, and the timing, in these dark hours is not ideal, but when I see the Earth like this, the 'Overview Effect' is impossible to resist." Another joked, "I can fly in space just fine. I played Elite Dangerous."

There was also some technical talk about details, and invitations for people to see the exhibits at the International Space Museum in Second Life. For the crowd, it was a proud moment for America and the world, and a welcome change from less pleasant news such as the Coronavirus pandemic and shutdowns, and the rioting going on across many cities in the United States. While the country may be going through troubled times for now, it's future was in space.

To see a video of some of the highlights of the launch, Click Here. To see a longer video from NASA, Click Here (launch at 4:23).

Correction: I originally thought the event was at Spaceport Bravo. It turned out to be at the National Space Society sim.