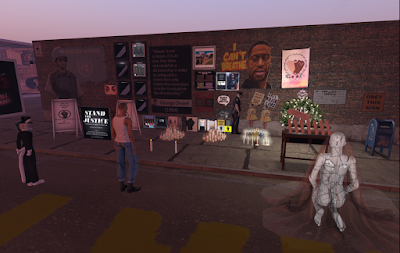 While things in Second Life headline news have largely been happy between the Relay for Life and upcoming Second Life Birthday, real life news has been troubling. Besides the Coronavirus Crisis, for over two weeks a number of protests have happened across the United States over the death of a man as a result of rough treatment during his arrest, George Floyd. According to Wikipedia, he served four years in prison following a plea deal in which he was originally charged with armed robbery of a home, but following his release became involved in church and found employment. He was 46 and is survived by five children.

High above the Moonsong sim, a memorial to Floyd was set up. Besides the flowers and candles, there are various angry statements, including a quote from George Orwell. There was also a sign for "Stand for Justice," a store in Apple Fall Events that raises money for Black Lives Matter.

A few days ago in the official blog, Linden Lab would comment on the protests, "Social Injustice Has No Place In The Virtual World," announcing they were donating $30,000 to social justice charities, and suggesting residents do the same.

Like many of you, we are feeling a combination of horror and outrage over the history of racism against Black lives. What we continue to witness is deeply disturbing and demanding of immediate social change.

The killing of George Floyd seen on video around the world is only one in a long and unacceptable series of violent and racist attacks and discriminatory behavior directed against people of color.
We stand in solidarity with Black Lives Matter, all victims of systemic oppression and violence, and with Black communities across the U.S., the globe, and the virtual world in condemning racism and any and all actions that promote division.

Our mission at Second Life has always been to help build a better world, and in support of Black Lives Matter, we will be donating $10,000 each to three charities that are active in helping to fight oppression and injustice including the American Civil Liberties Union (ACLU), National Association for the Advancement of Colored People (NAACP) and the Southern Poverty Law Center (SPLC).

How can you help? This weekend, you can participate in the Stand for Justice fundraising effort dedicated to raising funds for Black Lives Matter, Black Visions Collective, Campaign Zero, the National Police Accountability Project, and a Split Bail Fund benefiting 38+ bail funds nationwide. We also highly encourage you to sign petitions, text, call, or donate to show your support, acceptance, tolerance, inclusion, and equal opportunity for all.

Now is the time for us to come together as a community and to stand up for what is right, just, and decent. We hope that you will stand with us in our fight for a better world and in recognition that Black Lives Matter today and every day.

The Newser has yet to hear about any actual demonstrations within Second Life, though I have heard a number of comments about events both in Second Life and Discord channels, some supporting the protestors, some supporting the police combating rioting that has followed a number of the protests, and some urging caution and reminding people the rioters are not with the protestors and that most of the police are not troublemakers.