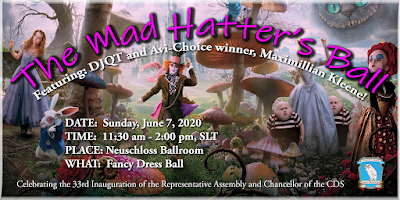 Join us for The Mad Hatter's Ball, on Sunday 7 June at 1130 SLT.  Don't be late for this very important date!

What:     Mad Hatter's Ball
- Celebrating the Inauguration of the 33rd Representative Assembly and Incoming Chancellor

Who:      DJ QT and Maximillion Kleene

The Mad Hatter's Ball is a whimsical and fun fancy dress ball with a theme inspired by the Lewis Carrol classic, "Alice's Adventures in Wonderland".  The Hatter is a Victorian-era hat maker to the Queen; he is not angry, but he is crazy-silly-fun "mad".  Brooke Brandenburg has transformed the Ballroom into the Wonderland world of the Mad Hatter.  Rosie Gray's event poster spectacularly captures the spirit of the event.

We have two amazing performers who will lead the festivities, our own DJ QT and Maximillion Kleene!

DJ QT will open the Ball at 1130 SLT.  Live from Holland, QT recently entertained us during the fun dancing-in-the-rain April Showers event.  We are excited to welcome her playful mix of rockabilly, blues, 60’s, 70’s, 80’s music back for our Ball!

Maximillion Kleene takes the mic at 1200 SLT.  Max is a live singer in Niagara Falls, Canada and winner of multiple Avi-Choice Awards over the years.  He has been thrilling audiences in SL since 2007 with his musical magic and vast repertoire of quirky, classic, and current covers.  See http://wslpromo.net/max-kleene/ for Max's bio and song list.

QT will return to the live stream at 1300 SLT for the final hour of our celebration.

The CDS Inaugural Ball celebrates the incoming Chancellor and members of the Representative Assembly for the 33rd term.  The Oath of Office Ceremony officiated by the Dean, will take place on Monday 25 May at 1200 SLT.  All are welcome to attend.