EOTB: "Railroads Made In Second Life" 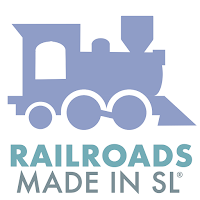 On Tuesday June 23 on the official blog, Linden Lab announced a series of videos: "Railroads Made in Second Life." There are five videos, all produced by Draxtor Despress.

This year’s theme for our SL17B celebrations is “vacations and road trips” - and, in this spirit, we are pleased to debut today a five-part mini-series dedicated to the unique history, culture and communities surrounding one of the most popular modes of travel in our virtual world - railroads in Second Life.

Our virtual journalist Draxtor Despres recently took a ride on the rails of SL to travel across miles of virtual railroad tracks spanning across the grid. Along the way, he makes multiple stops to meet a wide variety of colorful characters and creative communities.

In Episode One, Drax gets together with Hrdtop75 Deluxe to discuss some of the history of the Second Life RailRoad, which goes back to 2003 when the virtual world was new.

The next three episodes deal with three rail lines, the Bay City Short Line, the Okema Nakiska and Southern Railway, and the Zany Zen Railway. The fifth has an interview with Patch Linden, "who discusses the important role of railways within the expansive infrastructure of the massive Bellisseria continents." On Wednesday, there was also a "Railways Made in Second Life" special at the SL17B.

For more information, check out the Linden blogpost Here.