Reader Submitted: Gil and the Hogweed 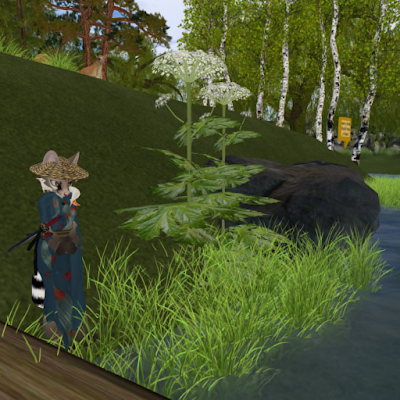 From Gil Otaared, when she dropped by RFL Spirit and found a huge "hogweed" plant. The picture was titled "Gil risks her life next to giant hogweed."

"I don't think it spread out of the sim it's in, SL prim vegetables usually don't.  But since it's clearly in-world, people should be on the lookout in case it starts growing on their land.  If you find one, call for professional help.  Don't try to pull it out yourself.  Don't even touch it with your bare paws.  Though it looks like a 2-3m tall giant carrot or cilantro (which it actually is), the carrot and cilantro family also includes hemlock, and its even worse cousin hogweed.  Eating even a small amount is deadly.  Even brushing against a leaf can put enough poison on your skin to leave permanent scars.  The only saving grace, the skin-contact poison requires UV rays to become fully active, so if you can stay indoors for the next month you may avoid the worst of it."
Posted by Bixyl Shuftan at 6:04 AM