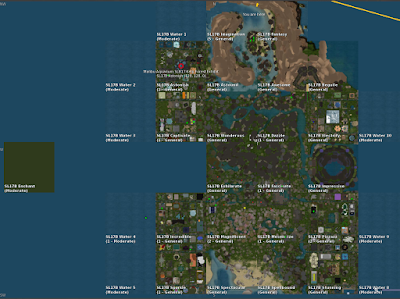 Yesterday on Tuesday June 16, the seven exhibitor SL17B sims were combined with most of the remaining ones. Only SL17B Enchant remains apart from the other twenty, with several SL17B Water sims added to the edges. As this is the sim where the Linden homes will be, presumably there is some last minute work done on them.

For the second year in a row, there is no Cake Stage, the tradition apparently having gone away with the resident-run SL Birthday events. Instead there is a Main stage at the corners of SL17B Wonderous, Dazzle, Exhilarate and Fascinate in the middle of the area. To the south end at where SL17B Spectacular and Spellbound meet is the DJ stage. At the north end where SL17B Imagination, Fantasy, Astound, and Awesome meet is the Auditorium for discussions. While we can't show any pictures yet, it will be different from the auditoriums for the past several years.

The exhibitor sims are SL17B Astonish and Captivate in the northwest In the northeast south of the entrance area is SL17B Electrify. To the southwest is SL17B Incredible and Sparkle. And to the southeast is SL17B Pizzazz and Stunning.

Besides the Welcome Area in SL17B Awesome and Beguile, other places include the Tapestry of Time, there's the Gift Area, the Pod Tour Area, and a couple spots to teleport to the Shop and Hop event sims.

The events start at 11 AM on Friday, and go on to Sunday June 28. The sims stay up until Sunday July 12.