Yesterday on Friday July 8th, at the Avatrian Central sim, people began to recreate in Second Life the launch of the final flight of the Space Shuttle Atlantis.

Hi folks! Just a quick update. People are slowly arriving here now :) The chosen Flight Commander and Pilot are already here, and we already briefed them and gave a short orientation. They are very excited and eager for launch! :) We're going to draw two names off the raffle at around 10AM EST, for the Mission Specialist 1 and 2 positions. Furthermore, 4 other names will be drawn and serve as backup or alternate shuttle astronauts :) See you down here in a few hours! :) 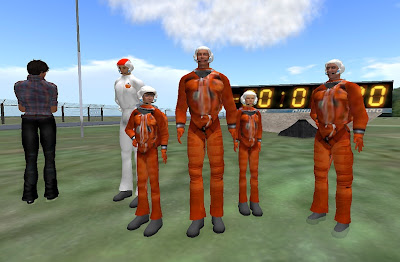 The final two team members were chosen, Fritzfranz Fride and Douglas Dragonash, who joined Phelpsa Resident and Walt Faulds whom were selected Wednesday. 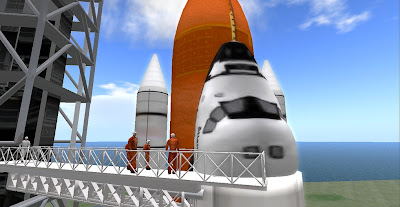 The crew was soon taken to the shuttle, where it's launch was timed to go at the same time as the Shuttle Atlantis in real life.

How did it go? Just check the Youtube below.

And so, Avatrian's salute to the Space Shuttle program is done. No doubt we'll hear from them again soon.

The real Shuttle is scheduled to spend almost 2 weeks in space. It is scheduled to return July 20th. If you're around inworld at the time, be sure to watch the landing at the International Space Museum, the Star Trek Museum, or other places showing footage of the landing.

Pictures from Chris Welles of the Boy Scouts of Second Life.

*Addition* Check out this Youtube of the whole event, link sent by Fritzfranz Fride: Click Here
Posted by Bixyl Shuftan at 6:00 AM