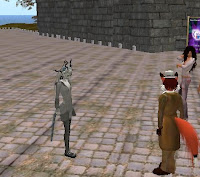 The Relay for Life Walk, one of the biggest yearly events in Second Life, is finally over. Having set a new record for the season total raised at over $370,000 US dollars raised, it can only be considered a success.

Yours truly didn't have time to write much about it, but there was one exhibit which stood out with both it's simplicity and the name of the builder: Bryn Oh.

For those not familiar with her, Bryn Oh is a noted artist on the Grid, sculpting prims like a painter glides a brush across a canvas, and creating intriguing machinimas of her work. She has done a number of works, including "The Rabicorn," and "Anna's Many Murders."

Bryn Oh was here at the RFL walk with a build of her own, one based on her latest machinima, "Mayfly." To music that I found a bit haunting and sad, the camera zoomed in on the flying insects, as the lines of poetry described the lowly life of the Mayfly larvae, finally getting a chance to soar into the sky for one day, before it's end.

The build, where it could easily have been filmed, is unique for it's simplicity compared to most other builds, but still detailed with the plants and mayflies. Plus, it's the one secton of track where it goes under water. Those mindful of getting wet shouldn't worry as the water isn't too deep.

Bryn Oh's "Mayfly" is at 2011 Relay For Life of Second Life, RFL Knowledge (61, 127, 22). While it will be around for longer than an adult Mayfly, like it's namesake it will only live for a short time before it goes away.

Stay tuned for more on The Relay for Life Walk.

http://www.youtube.com/watch?v=RnQ5HoUvIT8
Posted by Bixyl Shuftan at 6:00 AM