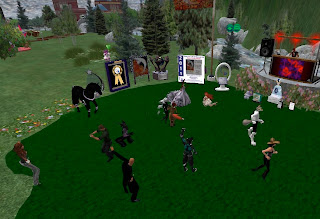 On Thursday night 6PM SL time in the Southern Colorado sim, the Passionate Redheads Relay for Life team got together for one final event of their own for the Relay season. Dubbed "The Last Blast Party," it was to celebrate their fundraising this year, in addition to looking back on the fun they had. The event was sponsored in part by KVXN Radio.

Daaneth Kivioq was the DJ for the event, and with the walk around the track so much on their minds, most of the songs he played were about walking. The tunage included Phil Collins' "On My Way," "Footloose," "We Did the Walk of Life," Willie Nelson's "On the Road Again," Johnny Cash's "Walk the Line," and Elvis Presley's "Blue Suede Shoes," and "Never Walk Alone." Someone had a birthday, so the Beetles' song "Hey Hey, It's Your Birthday" was also played. And a team favorite, "Calypso."

Probably a total of two dozen attended the party, more than a dozen at any one time. Further donations for the Relay were accepted instead of tips, many of which came from purchases of a Passionate Redheads' calendar, made by Timber Wolfenhaut, whom also had the privilege of taking all those pictures of the girls in their swimsuits. Also for sale for charity was a cookbook. And the awards won by the Redheads were also on display, such as the gold and platinum awards. 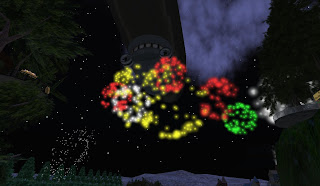 I run for hope, I run to feel

I run for the truth, for all that is real

I run for your mother, your sister, your wife

I run for you and me my friend

I run for life

And after that, the Redheads went their seperate ways, some looking forward to next season. Over 5,000 Lindens were raised at the "Last Blast."