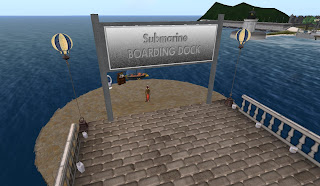 With the Relay for Life track due to come down sooner than expected, I made the decision to postpone writing on The Walk over the weekend, and instead do something on an example of one of the rides there before it vanishes. There’s so many cool things to do, sorry to say many will get a mention only after they’re gone.

One place that did get my attention was the “RFL Activity Water Region,” mentioned in a notecard passed around in the volunteer group of activities on the track. One link was to a “Jules Verne/Steampunk” submarine ride. So I ported over to see for myself. Arriving there, I found myself on a dock, and the submarine was next to the dock, ready for the next passeger. The top half was mostly glass, which made looking around in mouselook a fair option.

The stand next to the ship was labeled the “Romantic Submarine guided Tour System.” While the sub was big enough for two passengers, the ride’s just fine solo. After getting in, there’s a ten second pause for anyone else, then the ship begins going down under the surface. 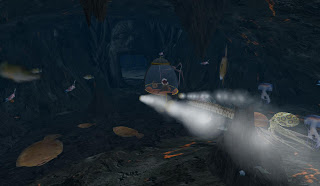 And the scenery is quite detailed. The water is just teeming with aquatic life from fish of various sizes, octopuses, jellyfish, and more. I think I saw a shark down there as well. The terrain was well done as well, forrests of kelp and other water plants, red lava flows, and more. The path of the submarine takes one into a cave and to some underwater ruins. The mermaid dance poses and rideable octopus suggests this area might be a merfolk hangout, which would add to the attraction.

The ride ends with your avie back on land, ready to get on the next attraction.

I highly suggest dropping by to see these rides and attractions. By tomorrow July 21, those that haven’t been taken down will be due to close.