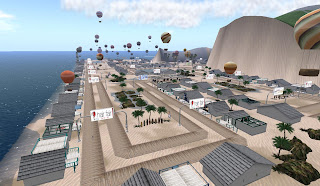 Today was the last day of the 2011 Hair Fair in Second Life. Going on for six years, the event described itself as celebrating "the best in Second Life Hairstyle design." The event had displays in tents from various companies and designers covering four sims, Platinum, Iridium, Rhodium, and Osmium.

There were numerous hairpeices/wigs up for sale, as well as bandanas and other headwear. There were also some freebies and demos available as well. The money raised goes to Wigs for Kids, a charity donating wigs to children suffering hair loss from conditions such as chemotherapy for cancer treatments.

This year, the place had a beach theme, with walkways of planks in the sand and surfboards standing next to palm trees. There were a few exhibits around, such as sand sculptures with poseballs one could sit on.

The entrance to the event is located at Platinum (15, 122, 21), for those wanting to check the place for displays still open before the sims are cleaned out. The official website for the event is at http://hairfair.wordpress.com/ .