Eye on the Blog: July Update and More Avatars for Newcomers

Linden Lab’s latest blog post mentioned several subjects. They stated that “the new Search functionality that was included in the most recent Viewer release will go live as the primary Search experience for all Residents.” While not a user of Viewer 2, I heard at times a few months ago it was next to useless. Hopefully they fixed that problem. If there’s a reason to be skeptical, they claimed to have made some major improvements on chat lag. My personal experience suggests there hasn’t been much of a change. They also stated the made some changes to their Marketplace, such as “Direct Delivery.”

They also released a number of new avatars, all non-human.


A longstanding question about the default avatars that the Lab provides is “Why do they only offer humans?” Well, fret no more! Check your Library > Clothing > Initial Outfits tab in any Viewer and you’ll be pleasantly surprised to discover 36 new default avs! We worked with three amazing creators and focused on balancing visual appeal with diversity and efficiency. We think you’ll find that this fresh batch of avis is far more performance-oriented than our previous defaults — and a heck of a lot of fun. For Residents using Basic mode, the new set of avatars will soon appear in the avatar selector. In a short time, they’ll be available at registration as well. You’ll be tempted to choose your favorite. Try out Second Life as a robot, a dragon — or even a sports car!


The new default avs come in three groups, the “Animal series” by Damien Fate, noted for creating the Loco Poco tiny avatars, the “Robot Series” by Renn Yifu, and the “Vehicle Series” by Xenius Revere. It might have been one of Xenius’ avatars Rodvik Linden/Rod Humble droped in on the Second Life Birthday Celebration. 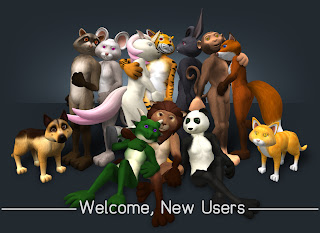 Of the avatar creators, Damien Fate had the most to say, posting about it in his blog.

A couple of months ago, Rhett Linden (Experience Design team) of Second Life reached out to me. This is not the first time I have worked with Rhett, I was part of the ILLclan team which put together the existing Orientation Islands in Second Life, but this job is something else! Recently, LL have revamped their new user sign-up to a snazzy new layout but felt their choice of starter avatars was somewhat lacking. So a few avatar creators in Second Life were called upon to bring 36 new avatars to the sign-up process, providing a wide range of preset looks for new users of SL to start exploring the virtual world as, including animals, vehicles, robots and of course humans.


Damien stated if his default av’s resemble his line of Loco Pocos, it wasn’t a coincidence, “Several LL members are big fans of Loco Pocos (a range of tiny animal avatars I created years ago) and wanted to use their likeness for these 12 new starter avatars.” But the Lindens were mindful of their “ease of use and efficiency,” especially the later as newcomers were not necessarily used to longer download times. The 5 prim hands were rebult to one each. Among the bipedials were two cartoony quadrapeds, which needed their own animation overriders.


Keep an eye out for possible derivatives of these avatars in the future – I’d love to create some more quadruped avatars or even convert some more Loco Pocos to this bipedal form, obviously with some more advanced features!


Although the avatars, at least some of them, were in my inventory, it seems they’re intended for Viewer 2 users. With the Singularity Viewer, there was no list of options for their folders, and trying on individual parts only resulted in an invisible avatar.

For those who remember the starter furry "ringtail" avatar years ago, Damien never once described these cartoony avs as “furries,” although he did describe some custom work as such.