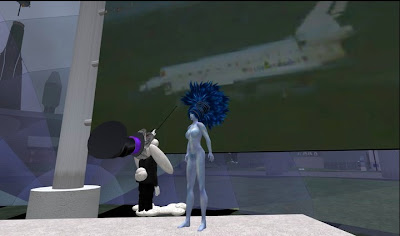 This morning at 3AM SL time, the Space Shuttle Atlantis landed back on Earth in real life. In Second Life, the landing was broadcasted in a few places on the Grid. Among them, the International Space Museum, where RacerX Gullwing was able to take this picture.

The landing of Atlantis means the end of the Space Shuttle program, the ships heading to museums, and for now the end of the US manned space program, aside for the occasional astronaut hitching a ride on one of Russia's Soyuz rockets. Although NASA's workers cheered the shuttle landing as their last hurrah, within the week thousands will be laid off and looking for new jobs.

NASA has been working on a sucessor to the shuttle, saying they could have it ready possibly in a few years. But the US Federal government faces a huge deficit and a massive debt, political commentators and private citizens alike wondering if it is heading to a financial day of reckoning. It may be many years before US astronauts go back into space in their own rockets.