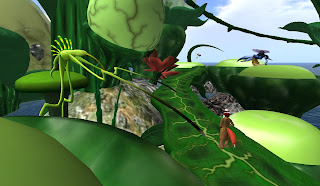 This Sunday July 3rd, the Alien Isle sim had a farewell party thrown for it before the place closed down. It wasn't the beloved classic the Lost Gardens were, but it was interesting and unique in it's own right.

A look at the place after the party ended showed a 7 Seas social area, as well as images of specialty alien fish one could catch. Looking around, one could explore the greenery, which was teeming with strange and unusual critters. Transparent pods on the big plant showed some embryonic life of some unseen creature.

The underwater wasn't neglected either. An accidental slip to down below revealed an uneven rocky ocean floor, with cracks valleys and tunnels, with life such as aquatic "fans." Steamy green goo bubbled from one cave.

How much traffic it had is unknown, though it did attract the attention of the popular MadPea area, which announced the farewell party. There was a small gift package left at the scene, which hours later the contents among some residents might have been all that remained of the Isle.

And so, another sim fades away into the nether. What's sadder is they seem to be happening at an increasing rate, as an article by Prim Perfect suggests.