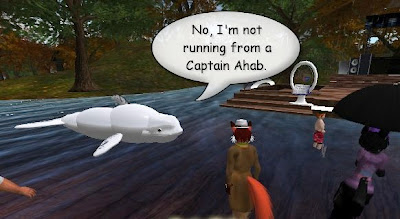 From the "Flood Party" on Tuesday on the RFL track at the RFL Youthful, the sim adminastrator was funning around with his collection of avatars. His joke with the fish one was funny, but those unfamiliar with aquariums might not know "beta" can mean something other than a product being tested. Fortunately, his other avies were just begging for puns, including from DJ Aryon Dagger, whom after seeing this began playing the theme to "Flipper."