A Look at the Odd Ball 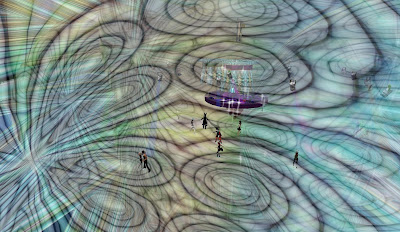 It's been a while since I wrote on the Odd Ball. For those whom don't know, the normally twice a week event in Second Life was started by Tuna Oddfellow a few years ago. Assisted by his hardworking partner Shava Suntzu, they have continued to amaze audiences with their psychedelic performances. The dazzling colors actually have an effect on one's brain. While a few guests have to leave due to uneasy feelings, others feel calmer, or euphoric.

Tuna and Shava have had a few problems recently, which they're waiting for further developments before talking in-depth about them. Until then, they'll continue the Odd Ball as much as real-life will permit.

Recently, the Odd Ball has been playing at Dragonhenge (126, 122, 651), usual times Wednesdays at 7PM, and Sundays at 11AM, subject to occasional real-life interruptions.

Some months ago, Chantal Harvey was at the Odd Ball when Tuna had a guest performer: Cypress Rosewood (video 1 minute).