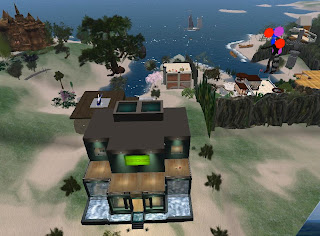 Recently, The Podex Exchange was the target of an attempted burglary. The day in late July began much like others at the time. The tellers were discussing the weekend at the Relay for Life track, and were talking about the various exhibits there. Up in the air, however, someone was headed their way.

Floating high up was a figure. He had gotten hold of some lighter-than-air balloons, and was able to take flight. And the breeze was taking him towards Podex. He was the burglar the SLPD have nicknamed “Clumsy Cooper” (a play on the noted thief Sly Cooper), whom has a record of trying to rob the exchange, and never succeeding. His plan this time: when just over the bank, he’d let go of enough balloons for a soft landing, sneak inside from the top, and make off with the Lindens.

However, Clumsy Cooper didn’t count on the region’s air traffic. First a vintage Second World War Two Imperial Japanese bomber flew by, blowing him off course. Then, a little pink dragonette flew over, and began pecking and clawing at the balloons, bursting them. Clumsy Cooper tried scare it by shouting at it, then tried to shoo it away. But the dragonette popped the last few balloons, and the bandit plummeted back down.

Fortunately for Clumsy Cooper, he was over the water at the time. Unfortunately, some of the bank’s neighbors had heard his shouting, let alone the big SPLASH! Wadding out of the drink, he saw people headed his way. He promptly ran off, dropping a notepad and some tools. Although soaking wet, the notepad revealed his plans. The people seeing the pink dragonette with popped balloons in it’s beak and claws, and the SLPD questioning nearby airports, Clumsy's ill fated mission was figured out. Another thing that doomed Clumsy's efforts, he had brought with him safecracking tools, which would have been useless at Podex. “All our exchanges are done through electronic transfer,” a teller explained. There had never been a threat to the exchange's funds.

Clumsy Cooper is wanted for attempting to circumvent a region ban and attempted griefing. Anyone with information of his whereabouts is asked to contact the nearest chapter of the SLPD.