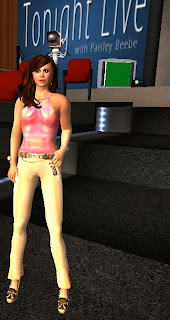 After about four years of running her "Tonight Live" show on Second Life, Paisley Bebee announced today the show will not be continuing.

"I’m really looking forward to a new venture in real life, and exited about taking a new direction," Paisley wrote on the Tonight Live website, "but sad also that I’m not going to be spending as much time on the grid and working with the best bunch of TV people ever! I would like to publicly thank all the people who have been involved in the show over the years, and there are quite a few of you to mention, including every single guest and musician and the wonderful audience who are always such a large part of the show."

Paisley Bebee, known as Leone Smith in real life, was already known as a radio personality and Jazz singer in Australia. In Second Life, she started her "Tonight Live" show under treet.tv, calling herself the first talk show hostess on the Grid, and remaining among the most popular. Every Sunday (except during season breaks), she would interview various musicians, builders, sim owners, and other notables of Second Life. With few exceptions, notably her interview with represenatives of Team Emerald during the Emeraldgate debacle, the show was done in front of a live audience.

The final episode was recorded on May 15th. She listed wanting to spend more time with her family in real life, and devoting more time to her current project, Digital Breezes, as her reasons for not continuing the talk show.

"I wish all the other show producers for all the TV shows on Second Life all the best, keep the light burning and best of everything! Best wishes to you all and I’ll see you on the grid!"