RFL Walk: And So It Ends 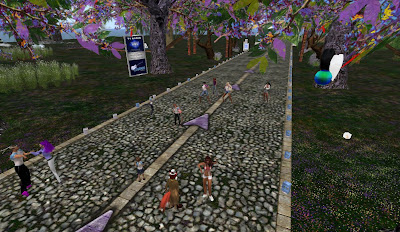 What was probably the last of the unofficial events of the Relay for Life Walk, the teardown party took place last night. I arrived a little late, but it seems it was a little smaller than the one I managed to catch a couple years ago. But there were some old friends there I hadn't met in a while, and a good time was had by all.

Looking around, some of the builds were still up, and I took a few more pictures, but much of the track was already gone, or mostly gone. A few places left a lone item, or two or three, such as landmark givers or critters. One place had a giraffe running around, which had been the source of a few "I found your giraffe" jokes in RFL Voulenteer chat. 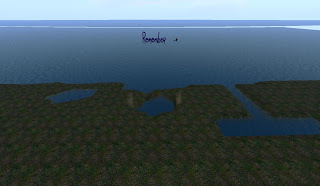 One place that stood out, it was clear of everything but just one word.

And indeed, The Walk was an event to remember. It brought the total money raised for the American Cancer Society to a new record: nearly 75 million Lindens or $373,000 US Dollars. The RFL in SL remains the biggest of online fundraisers online.

There were sad moments, remembering friends who have passed on. My sim neighbors talked about their late friend Artistic Fimicloud again and again. But overall the event was an unquestionably happy and fulfilling experience, one shared with friends old and new.

As Relayer Tahisha Fairplay put it, "If there's one thing I was taught in this group, it's to not mourn the death more than you celebrate the life."

Later on will be an in-depth article on the Relay Weekend, as well as pictures of some of the scenes, plus some reader submissions.