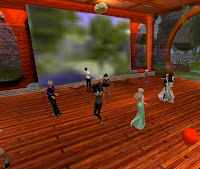 Eymerich Lane and Roselinda Mayo have an amazing sim in Second Life. It is called Roselinda's Paradise. Several times I have covered activities there, including a chess tourney, Christmas fun and also have covered their glorious art collection.

This time, I am amazed at the party to which I was invited recently. Eym and Rose also have a delightful sim named Roselinda's Paradise in the Avination grid. It is as charming as the one in Second Life with gazebos, fountains, and statuary around the sim. Now they have created a bridge between the two worlds.

On Sunday there was a party with music and dancing in both worlds and a chance to talk back and forth to the inhabitants of both worlds. Since I have an avatar in both I was able to attend both parties at the same time. When we first arrived the chatbridge was not working. But with split screens and passing chat back and forth it went well. You can read about the chatbridge here: http://www.intersectionunlimited.com/ourproducts.html .

Qwark Allen played progressive psytrance the first hour in both worlds. He also had an avatar in both grids. There were six artists performing across the metaverse in six hours. This is the first time I have experienced such a party! It seems to be a wave of the future, uniting the grid worlds. Can't wait til the next one!

Gemma Cleanslate
Posted by Bixyl Shuftan at 6:00 AM