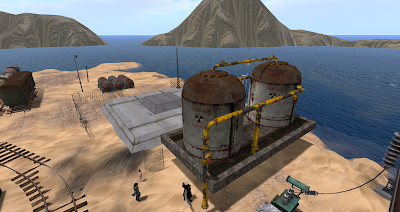 Since we last wrote in detail about the Deathlands, there's been some changes to the post-apocalyptic area. One was the instillation of two oil tanks. "Denis, our favorite BUNKER designer, paid a visit and decided we should have a new set of tanks in Deathlands," Rebel Wolf (HermitBlue Resident) would write in his Flickr page , "It's full of radioactive oil and waste. It will finally get a few empty? or Full? barrels on it , and be put in it's place next to the tracks! Thanks Denis!"

"It's really amazing to watch something being built!" Rebel would tell me the next day, "enis owner of BUNKER made them last night. Free! and I'm (the) first owner!" Of Denis (DenisLeontevv), "He has (a) MP store and  BUNKER sim, down right now but it's amazing." It wasn't the first of his builds in the sim, "The water tower was another of his creations. It's great to see sim owners cooperate, and the help he has given me is priceless." 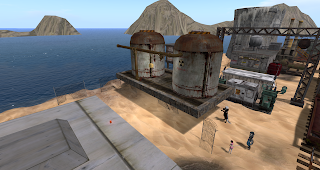 Rebel would share with me a video of Denis' rusty old Soviet-era bunker, "Our bunker while not as nice is cool. While not part of the original idea, we have zombie - er mutants you can shoot too here. ... I have bought a lot of stuff of him, he has really good post-apoco bunker stuff."

Of the oil tanks, "It's by the old train track that lead to nowhere now. We had a set of tanks there, but Denis made us  a 'nicer' set. Does nicer apply to Deathlands? Probably not, perhaps more old and worn! But its less prim, and looks amazing. The tanks and train cars are full of oil and nuclear waste from the old nuclear reactor."

Of DJ Wolfie's performances, Rebel told me they would be a regular weekly event, "I find its wise to let the survivors have a dance once a week, to relax. We don't want a insurrection or  avrevolt against the Baron."