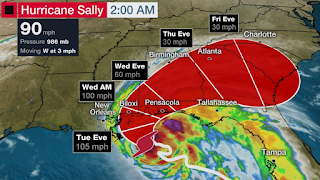 Residents whom live on the US Gulf Coast between the vicinity of New Orleans and Pensacola Florida are facing a Hurricane Warning as Hurricane Sally closes in. The storm has become a Category Two hurricane with winds about 90 miles an hour near the eye.

The storm has been slowing down as it approaches the coast, which is allowing it to become stronger. By the time it reaches the coast late tonight or very early tomorrow morning, it is expected to have winds of 105 miles an hour near the eye. Flooding is expected as far inland as Birmingham Alabama with tropical storm force winds about as far. Residents in the path of severe weather may be without power, and Internet, for a few days, possibly several.