For those who don't know, Titmouse is an animation studio "that develops and produces animated television programming, feature films, music videos, title sequences, commercials, and short films." The numerous shows they've had a hand in include "The Venture Brothers," "Superjail," "Megas XLR," and "Star Trek: Lower Decks." Among the traditions the studio has had over the years is the "smash party" in which various objects are placed in a steel cage (cheap or broken/useless), and someone goes in and pummels everything with a sledgehammer or axe. Company founder and CEO Chris Prynoski would say of the event, "In the 21st century these types of activities are frowned upon. The Smash Party is a night where one can experience the visceral catharsis that our cave-person brain secretly desires without the stigma of our repressed society's judgement."

Titmouse would end it's smash parties in 2019, preferring to end them while they were still popular. But today one such party is taking place here in Second Life, Saturday September 12 at 6PM SL time. 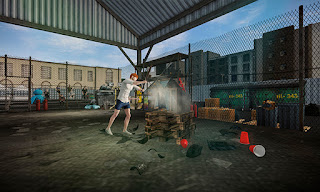 Expect the unexpected at the Titmouse Smash Party ... Anything can (and probably will) happen at this virtual world gathering where participants are invited to smash, bash and crash one of the hottest parties of the year held by independent award-winning animation production company Titmouse ...  Attendees of the Lightbox Expo and the Second Life community are invited to attend this year’s festivities, which include a combination of music, art and overall anarchy. At the center of the event is an interactive smashing cage where attendees can smash objects with a variety of different weapons. You can also meet and take a photo with Titmouse mascot, Mr. Chirps.

Rumor has it that the region is filled with more than a few easter eggs so don’t be surprised when you encounter everything that is weird and wonderful -- all springing from the imagination of the Titmouse team. Eagle-eyed attendees may see a few familiar faces from the Titmouse creative team and animated characters in the crowd, too. (Did somebody say Dethklok?)

What’s a party without free swag? Don’t forget to pick up your free virtual gifts as you arrive.

The party will be at https://maps.secondlife.com/secondlife/Smash Portal A/246/103/23 . According to the blog post, the area will be blocked to the general public until just before the event, and will be closed after it ends.