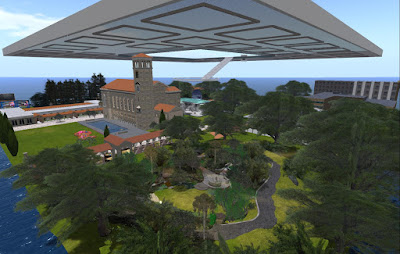 A sim that's made the news a number of times in the past will soon be closing, and will have one final event.

But it seems almost five years after the end of the yearly art competitions, the UWA area has finally run out of chances. It was announced in the UWA 3D Art and Design Challenge group that the last sim, University of Western Australia, would soon close, after Midnight December 31st . So it it's honor, there would be one last event.

One last show... let's make this a good one.
Uni of WA estate is down to one region and it will disappear at the end of the year. (yes REALLY disappear)
Jayjay, Freewee, quadrapop and all the others who have helped put together art and machinima challenges over the years invite you to take part in this event organised by Chuck Clip.

This is a grand finale, a sad farewell to show our gratitude to UWA and all that they did for us as artists, curators, and residents of SL. Their work brought life and beauty to all of us and made the art world in Second Life a thing to behold.

The theme is "Gratitude"
This art show is open to everyone. The theme is “Gratitude” with a 150 prim limit per artwork, and limited to one entry per artist.

Why The Theme “Gratitude?”
For over a decade, the University of Western Australia has been synonymous in the minds of many residents of Second Life with the arts and the support thereof. Their work was unparalleled on the grid, and made waves in the art world that, even as they prepare to close their sim, resonate through the art world today.

There are so many people whose lives they touched in one way or another. So many artists found inspiration in their 3D Art Challenge themes, and support in the encouragement of the community they created.

I, Chuck Clip, am one of them, and I am honored and humbled to have been granted the chance to organize this event. I’ll attempt to carry their extraordinarily heavy torch, to continue to support the arts in Second Life in their stead.

Let us all come together this one last time to say thank you to the men and women of this great institution, to celebrate their achievements, their impact on our own achievements, and to mourn their departure.

The deadline for interested artists to enter is November 1. There's a 150 prim limit per exhibit, and "Artwork entered should be able to be interpreted by the casual viewer as being representative of the theme." To enter, head to the UWA landing point at University of WA (76/227/25) or to Sinful Retreat (137/142/52). Both sims have a UWA Art Show Submissions box located there, "To submit entries, select the entry in your inventory (left mouse button) and then press CTRL & drag the entry while holding down that key to the UWA Art Show Submissions box. When the cursor is over the box (red outlines should appear around the receiver box), release your left  mouse button and the item is received. Do this for BOTH your entry and your Artist Notecard." Those who have problems doing so can pass the exhibit and the artist notecard to Chuck Clip.

The event opening is November 11, from 12 Noon to 4pm SLT. Exhibits will be taken down on Dec 31 or just before, before the sim closes.

For more information, check the notecard in the UWA 3D Art and Design Challenge group.