It was on October 2016 that the University of Western Australia area was given a reprieve from three of it's five sims closing down. But a couple weeks ago, Curator FreeWee Ling announced that they would be holding one more event, their "Final Chapter" before the sims (save SJSU Atlantis) are shut down, which is scheduled for the end of July. The theme of the event is "Transformations." In the past, the UWA would offer prizes for the best displays and videos for it's events. This time, there is "No prizes. No judging. Just warm memories and hopes for a brighter tomorrow." 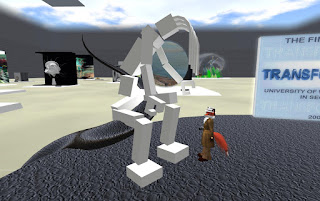 The UWA presence in SL is scheduled to cease the end of July 2017. (Details about that will be posted later. Contact FreeWee Ling if you have questions.)

Before that happens we want to have one more show! Starting immediately, we are accepting entries for the literal UWA show to end all shows. We are hoping all our old friends from the past seven years will want to be part of this last hurrah. But we also welcome entries from those who have never shown here before. It will be a regular exhibition, similar to the current IMMATERIAL show. No prizes. No judging. Just warm memories and hopes for a brighter tomorrow.

Our final chapter is  open to anyone as usual. Entries will not be judged and no prizes are offered. This is NOT a competitions, but an exhibition/celebration. As a small incentive, the show will be documented and an exhibition catalog will be published online as part of the UWA Studies in Virtual Arts (UWA SiVA) journal series.

Our final show is to be titled "Transformations" and is about beginnings, endings, transitions, change. The theme is deliberately vague in order to allow for the broadest possible interpretation.

The University of Western Australia has has a presence in Second Life for many years, since October 2009, and became known for ir's art and machinima (videos done in virtual reality or computer games) contests for cash prizes. For Second Life residents, especially fans of art and those who value the presence of universities and colleges, while they can take a little comfort there is some time to prepare for one more event, the announcement that the reprieve the UWA sims were given was just a temporary one and that the sims are set to close later this year is a sad one.