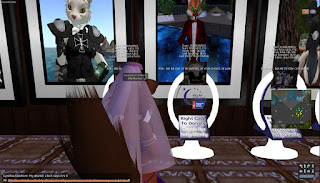 It's been a good week for the Relay for Life in Second Life's Sunbeamer team, the team of the Sunweaver community. Last Friday, March 17, the team reached the 25,000 Linden mark, and "Rising Star" rank. as a result of their "St. Patrick's/Capt'n's Birthday" event.  Since then, the team has continued to get more funds, thanks in part to two "Bid Me" events, a "Bid Me (your choice) by team captain Rita Mariner, and a "Bid Me Human" by Ranchan Weidman. The Wednesday night party at Club Cutlass was the last chance to make donations at the four kiosks for the two events, each woman having a "stay" and a "change." 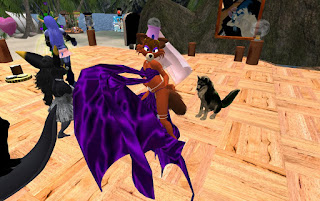 So what would Rita be stuck as for a week? There was a comment or two about making her the East Indian human avatar from the 2011 "Bid Me Human" she was in. But instead it was suggested she use an avatar she uses only once in a good while, her custom-made vixen Lotta Lamour, a character from the "Tale Spin" cartoon. Those less than familiar with the cartoon had called it her "harem vixen." 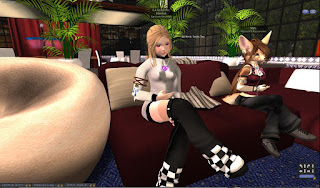 Ranchan, whom has switched around a little from domestic canine to fennec fox, now had a change of her own to make as well. She soon found an anime-influenced human avatar to wear for the following week.

The money from the event put the team over the 50,000 Linden mark. But the cash would continue to roll in.  The following night, Rita would announce the team had passed 75,000, "We are now at Bronze Level!"

Despite that the community already had to raise lots of cash just before the Relay season, the team has been progressing faster than last year. In the 2016 Season, it took until May 19 for the Sunbeamers to reach Bronze rank. But eventually the team would go on to reach Platinum rank. How high can the team go this year? Eventually we'll see.