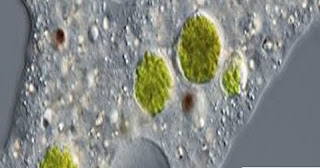 Xymbers Slade, whom in the Newser's earlier days was a contributor of both stories, horoscopes based on his inworld tarot card deck, and some occasional cartoons, has been making himself busy lately. In the "Reddit forums under the pseudonym "TheDiscordedSnarl," he's set up a kind of interactive story/game that fans of "Spore" and from years ago "Sim Earth" might be interested in: "From The Primordial Soup." Here, people can guide the evolutionary development of an organism by discussion and voting.

So far, about 1.3 billion years in story time have progressed. The single-cell organism that the readers started out with has evolved into a multicellular organism. It shares the ocean with several other organisms, some it feeds upon, some that try to feed upon it.

As of now, the interactive story has 186 participants, a few of whom have contributed some artwork. It should be interesting to see how Xymbers/Discorded's game progresses as the reader-guided creature continues to evolve.