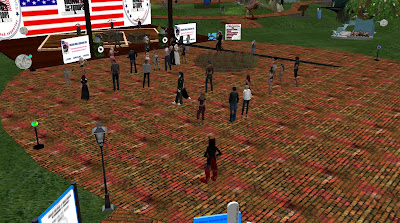 On Sunday, March 26, the Veterans Isle sim held it's monthly benefit concert. Organized by Frets Nirvana, the event was to raise funds for the Homes For Our Troops charity, and ran from about 4PM to 9PM SL time. Besides DJ Waya Snowpaw, several live musicians were scheduled to appear: Savannah Rain, Dimivan Ludwig, Hogan Bailey, and  Frets Nirvana himself.

Following Hogan Bailey concluding the event with his live singing and dancing girls performance, Linden dollars continued to be contributed past the slightly more than 100,000 L that had been brought in by then. Checking the following morning, the total had gone up to 110,000.

Frets Nirvana holds a few other benefit concerts for Homes For Our Troops every month, but his event at Veterans Isle is his largest and most successful. It is held monthly on the last Sunday. The next fundraiser in the sim should be on Sunday April 30.
Posted by Bixyl Shuftan at 6:02 AM