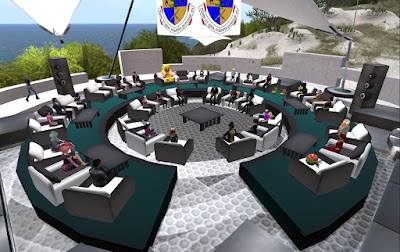 Right now, the Virtual Worlds Best Practices in Education (VWBPE) Conference is taking place. It started on Wednesday, and ends tomorrow, Saturday April 1. There are a number of exhibits, as well as a number of discussions, such as the "Critical Thinking in the Age of Information Overload" That took place at 3PM SL time on Thursday March 30 (pictured above). Ebbe Linden would speak during the conference, but not at the auditorium like previous years. Instead it was a recorded interview by Kevin Freenan of "Above the Book" in which a small number of people were invited. Part of the reason was the people of VWPBE wanted the discussion to be more of a focus of education and Second Life/Sansar, and a little less about issues concerning the mechanics of Second Life and Sansar.

Still, there were a few occasions in which Ebbe talked some about  Second Life and Sansar on matters outside the VWBPE's topics of interests. At about 23:30 into the video, Ebbe explains more on why Linden Lab is developing a second virtual world, "We can't afford to invest all the money we make from Second Life back into Second Life. ... We couldn't bet on Second Life still being dominant a decade from now." Still, he admitted, "Sansar is a gamble. ... We have to prove it's going to be successful." Still he felt the future would have a number of virtual worlds of higher quality than Second Life, so they might as well develop one. That didn't mean they were leaving Second Life behind. Ideally, he felt, Linden Lab would have two successful virtual worlds."

For those looking to make it big in Second Life, Ebbe did have a little advice, "You have to spend quite a bit of energy to be successful in Second Life. You can't just walk in. ... It takes a bit of effort." While he felt "the bar is too high for many to overcome," when the interviewer suggested Second Life has lowered the bar for many, Ebbe agreed.

The conference goes on until tomorrow. For those wanting to get there, Click here: http://maps.secondlife.com/secondlife/VWBPE%20Gateway/175/133/37