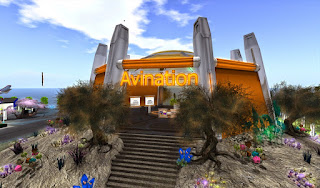 Some sad news for virtual world fans, especially advocates of OpenSim. Avination, which used to be one of the largest alternative worlds to Second Life, has shut down after being offline for months. The company of the same name behind the world went bankrupt on March 7.

According to an article by in Hypergrid Business, Melanie Thielker, the owner of Avination, stated that there was hope that users of the grid could see their builds and inventories again. But since the company behind the grid was bankrupt, all the money was gone. In the comments following the article, Thielker stated, "The grid itself isn't dead. The grid is it's users and it's content, not a name or some servers. We have found a way to be able to offer the Avination experience, just not under that name and not with me as the top dog. Stay tuned, after the weekend there will be some info on the old Avination website address." 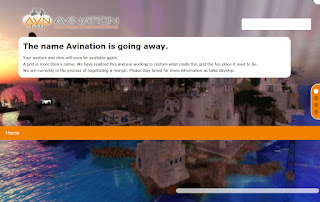 A look at the Avination website had no links to other pages. The blog and forum were apparently gone. Just a message stating, "The name Avination is going away. Your avatars and sims will soon be available again. A grid is more than a name. We have realized this and are working to restore what made this grid the fun place it used to be. We are currently in the process of negotiating a merger. Please stay tuned for more information as talks develop."

After Avination went online in 2010, it quickly gained a following of about 9,000 active users a month in April 2011, rising faster than InWorldz, which went online at about the same time, though never did come remotely close to Second Life's numbers. When I visited the world in it's first anniversary celebrations, things were looking well. Inara Pey of Modem World would also write about her experience there, feeling although the place wasn't as well known as InWorldz it showed promise.

But then the grid was hit with severe setbacks. Later in 2011, criminals used stolen credit card numbers to buy up $126,000 USD worth of virtual currency from Avination, which it had to pay back. This would happen again in 2015. Both instances wiped out the savings of the company behind the grid and left it in debt, or "gutted like a fish" as Thielker put it. The number of active accounts would plummet, and the number of sims would drop as well. Also in 2015, Linden Lab's lawyers ordered Avination to stop trading Linden dollars directly for it's own currency. By January 2016, it had only around 1000 active users a month.

Then disaster struck. In the summer of 2016, Avination suffered a "catastrophic data loss" that took the grid offline. Thielker would look for a new hosting provider to house the grid, but never found one. Finally it was decided Avination was just too far gone to save, "We allowed the company to lapse because of the damage to the name Avination."

And so, one of the better known alternatives to Second Life is no more, at least for now. Though even if it does come back, the tiny numbers of "There" are not a good sign for what future Avination might have.