It's been a little over a month since the new President's inauguration. But political discussion in Second Life has still been going on. Some residents would rather have nothing to do with politics and it's "poo-flinging shrieking monkeys" to paraphrase one. For others, however, it remains a hot topic. 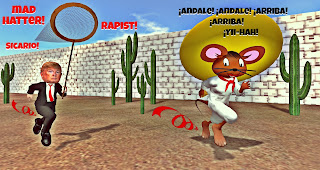 "Avatars Against Trump," a Flickr group, invites Second Life photographers "to express their opposition to Trump and his policies in screenshots and machinima. ... Get creative, get angry, get ridiculous with in-game signs, sculptures, satire, and more!" As of the writing of this article, various people have submitted over 140 screenshots. Many were dark and humorless pictures, calling for resistance. Adolf Chapman in contrast had an amusing one inspired by a news article about an upcoming cartoon movie, poking fun at Trump's idea of a border wall.

Earlier this week in the Second Life Republicans group, some of whom gather to listen to the "Front Porch Political Talk" conservative podcast, there was an announcement by Hatton Humphrey, known in Second Life as Hatton Hunghi. He was putting his podcast on hiatus. 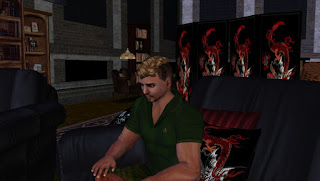 Those are very difficult words for me to write but I have to. For a number of different reasons the show has, for the moment, run its course. We have always had the goal to provide insight and information from different perspectives and on different issues. The current media and political climate makes achieving that goal week in and week out neigh on impossible. The arguments are repeating themselves and if we continue on the path we're on it turns into either an echo chamber or a broken clock.

Hatton thanked his listeners for their support over the years, his show having gone on since 2007. He expressed his hope to "restart the show some time in the future." He reminded that the show's Facebook page was still up for people to leave comments.