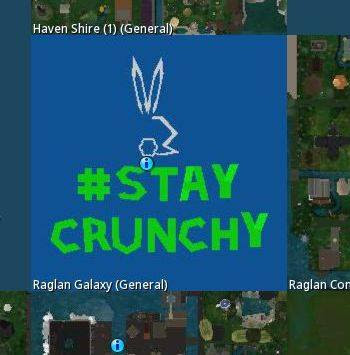 Just when you thought it was safe again to look at the map over Raglan Shire.

From early November to early January, with a respite for Christmas, Raglan Shire, or specifically the Raglan Galaxy sim has been the subject of some pranking/airborne graffiti. Since then, nothing new has been posted about the map until the weekend when Linn Darkwatch posted this picture on Facebook, "Apparently it's Bunneh Butt Friday in Raglan Galaxy," a reference to Raglanders posting pictures of the behinds of rabbits on the community's Facebook page as some kind of inside joke.

Whatever "Stay Crunchy" means hasn't been guessed at. But it seems the Raglan map pranks are back.

*Addition* Linn Darkwatch stated in the comments, "'Stay Crunchy' is a motto of Zayn Till, the Raglan sims' magistrate"