In January, the Newser wrote about the Wild West Roleplay, a twenty-three sim area of connected roleplay sims with Old West themes that ranged from desert to mountain to forested to town. There are a variety of roles one could play, from cowboy, to soldier, to outlaw, to American Indian. The first article dealt with getting started, getting the HUD and a few freebies at the starting point in Colorado, and how one can make a little RP cash by mining and smelting bars, and make a few basic items. But a roleplay is more than just making money and things, and there's more to the place than being a miner or a smith. 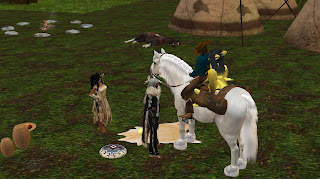 It was probably appropriate that the first people of the roleplay I came across after Goneigh, the owner of Titingham or "Indian Wilds," were representing the Old West's original inhabitants: American Indians. The first two people he introduced me to were Grey Wolf (Fairy Randt), and Ipa-Cik-Ala (Spiritkiss Snook) two shamen of the Ogllala Lakota village. They had moved to the sim this month, previously making their home area in the Oregon sim, having created their tribe two and a half years ago. 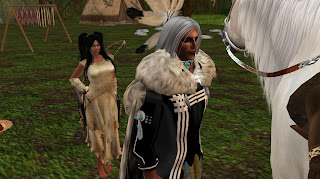 So what's life like in an Indian village. Usually it's peaceful enough, Ipa-Cik-Ala saying, "As shaman, I do my prayer morning and night. My husband like to go scouting, and I cook." But it turned out earlier things were not typical, "Today we had some action, a stupid pawnee like to make trouble and say bad things. My husband Tashunke Witka and war chief Lone Wolf captured him. We interrogated him and then he got away (TPed out). But I learned a lot. ... I had a feeling who he was." So what would they do next? Ipa-Cik-Ala answered, "The natives have a council every week. They are usually good to go to."

Ipa-Cik-Ala described typical council business as, "matter of events being planed, training, wedding, who is fighting who." I asked how many weddings happen around the place. She answered, "There was one last week in Sonora." Grey Wolf told, "I have done approximately seven weddings." Ipa-Cik-Ala commented, "(We) Oglala, we take our time. There is a ritual you have to go through." ?
"Same with tsa la gi (Cherokee)," Grey Wolf added. Asking what the ritual involved, I was told, by Ipa-Cik-Ala "The weddings are all alike, except the fast way where the chief blesses the wedding by there tepi. I was married in Cherokee, very magical. ... I like helping in the Cherokee way." 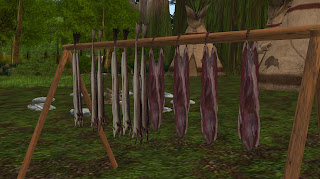 I asked about the trading of goods between the tribes. Ipa-Cik-Ala told me, "A Oglala warrior named truc. He travels to all the lands an' trades. He is the best at it. There are also G & S items here." When the question of how many tribes there were in the Wild West Roleplay came up, she answered "Five or six, I think." It turned out some of the tribes down south were what Goneigh called "German-speak" tribes, "It is a bit of a fad in Germany." Ipa-Cik-Ala added, "Yes, I began here with the Germans." 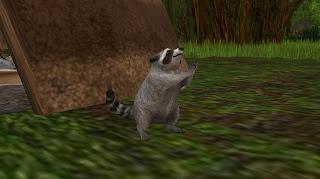 Talk turned to other things about the roleplay. Goneigh commented, "As an animal, I stand on a pasture to eat, and stand on a lake to drink,  and try not to get injured from wild predators." Among the hazards here were what Goneigh called "static predators, bison, boars, gators and rattle snakes..  and active RP predators , wolves, mountain lions, bobcats and jaguars. All things that were around in the wild west days. The HUD allows for health and damage control and the weapons used will register hits on your health. Animals can combat using their teeth and claws, and hooves." Ipa-Cik-Ala remarked, "The wolves respect Goneigh."

Goneigh went on, "The humans will need to mine minerals and gather wood and ingredients to make necessary things. Some things that they make take considerable time to build." "Traps are the hard job," Ipa-Cik-Ala added, "I make them for my husband. He traps an' gives me the meat."

Goneigh reminded, "This is not a shoot-em-up place. (The) roleplay must be consistent with genre. And random attacks are not allowed without some kind of RP first. Once a fight has started properly, it is actually a running shoot-em up. Not uncommon to see several soldiers and several Indians in a mass fight. ... If you register too much damage you fall unconscious for a preset time limit." Ipa-Cik-Ala added, "And you can be captured."Yeah. if you are unconscious, people, friends or foes, can drag you off. If you fall to a wolf pack, they can drag you to their den." "As a healer, I can sneak in an' drag off people to heal them." 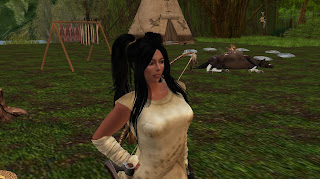 Ipa-Cik-Ala went on to say some of the roleplayers were child avies, "There are about six active kids in camp, but some more than others." So how is camp life for the kids, Ipa-Cik-Ala smiled, "They love the family part. We are like a big family and watch out for each other." Grey Wolf spoke up, "It is time for learning and growing." Ipa-Cik-Ala told me, "Grey Wolf has story time here." Grey Wolf went on, "Each tribe raised dinyotli (children) in different ways based on culture. Usually the grandparents did a lot of (the) teaching, parents busy working do their jobs." "All the women were like Mother an' cooked for anyone hungry." "Dinyotli (children) would help depending on their ages." Goneigh added, "Some of the tribes even have story hour each week." "Stories an the elder tell lessons," Ipa-Cik-Ala told. "My daugther Feather, she had school and told native ways. She is on break, but when she comes back we will do school too. ... Many of the months have ceremonies. A good time to dance an' give thanks." 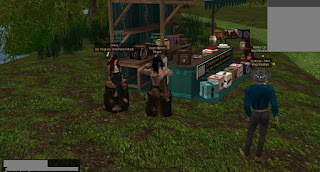 We soon parted ways, and later on Goneigh would take me to a couple American Indian roleplayers of the Cheyenne tribe, also in Indiana Wilds. They were Taigi (moonstonelust) and Uhaya, the chief. Uhaya was the one who would show me the mine area described in the first article. Besides mining, another way to make cash, Taigi explained, "you can shoot rabbits and sell the skins." One would need a knife of course, either making one, as explained in the first article, or purchasing one from an NPC merchant. Uhaya saying, "If you shoot a rabbit, you need a knife to get the flesh for meat. So you make a blade in the forge, then make a knife from it at the workbench. You need wood for the knife too. You gather wood, like outside of this trading post, then make a log out of it, then use the log plus the blade to make a knife. Because a knife has a handle of course, thus the wood. You can also make axes and traps for animals, and so on. You can get a boar with a trap, and get the meat from it. You can use the axe for melee fighting. So all the different things you gather and make sort of cross-reference each other in ways like that." 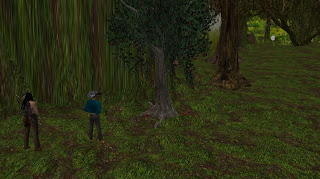 So where can one find wood?  Uhaya showed me a few places where wood pieces spawned just outside the trading post and a tree not far from it, "wait a few minutes and new wood will appear, which you can also pick up. So you can gather wood until you have 20 (pieces), then go make logs out of that, then come back and get more wood, and eventually you'll have both wood a logs full in your hud. ...  I like to keep my log and wood stores full. You need logs to make sawdust, which is also a component in dynamite, and other things. Some things take more time and effort than others. Other things are more simple." 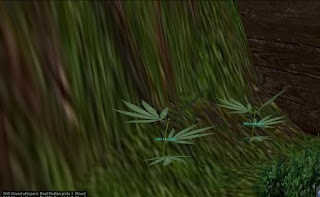 There were other things near the trading post one could pic off the ground too, an apple, a tomato, some herbs, and, cannabis? Uhaya explained, "Yes, cannabis is used for some medicines and I think rope too." Further away was an apple tree, which more apples spawned at the bottom. There was also a spot in the water, where one could click a few times and eventually the HUD would show you as full.

Eventually, I would part ways with Chief Uhaya and Taigi, and rode off into the virtual sunset. So that's all for now from the Wild West Roleplay. Until next time, happy trails.