In November 2015, the Steelhead Community's sims closed down, a result of the real life financial and personal difficulties of the landowner TotalLunar Eclipse (as well as Linden Lab locking our the account in a dispute). Since then, the community has existed in a kind of diaspora, many finding new homes in the Caledon and New Babbage areas. But they never quite forgot their old home. Especially not it's appointed sheriff Fuzzball Ortega. As time went on, he eventually would reopen the community's steampunk club Club Gearz, and hold a Steelhead reunion. But it wasn't quite the same.

But on Monday, Fuzzball made an announcement in the Steelhead Facebook group. 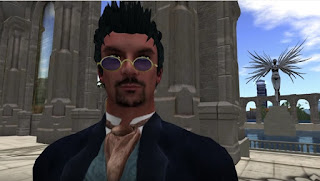 So, here's the deal. Since Steelhead closed. I had been researching on sim ownership and Mainland ownership. Caledon is nice, but it was not quite home.

At the job that pays the bills, I got a promotion, with a nice pay raise. Also, did my taxes and, despite paying a penalty for a brief period of time of not having insurance last year, I'm getting a good chunk of change back. I'm not in debt, I don't have rent or any huge bills to pay, so I decided to purchase my own sim, soon as the refund comes in. And I would still have plenty of money from my refund check left over to hold on to.

I also wanted to use it as a tie in of sorts for a future project that I'm working on for Krypton Radio. The name of the sim will be Steelhead Bay.

Steelhead chat had at least one lively discussion, "Steelhead will rise from ashes!" "Promoted from marshall to mayor - dat's not too shabby." Jimmy Branagh mused, "Does that mean I'm promoted to Marshal?" "Only if you rent a parcel." He was told by someone. Jimmy responded, "Ah, buying high office is still an art in Steelhead." Fuzzball finally broke in, "Calm down, everyone. It ain't gonna happen right away. Still have to procure the funds. But it will happen, I promise." "Well, you seem to have a bunch of willing renters Mr. Fuzzy." he was told. "I'll explain everything in due time."

So it would seem Steelhead is finally coming back. Most likely this time there will be no Mount Saint Hellens eruptions. But perhaps we'll see more of characters such as the Sasquatch, and Jobias Barthelmess, and events as only Steelhead could do them like "Hot Cocoa."