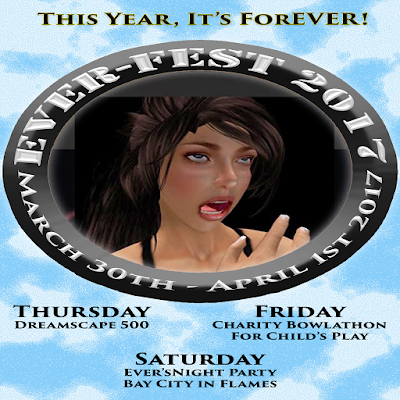 Recently, E.F. Committee (EFcommittee Resident) of Bay City finally revealed the reason for the secret messages he or she has been sending since just after Mole Day, here, here, and here. The community would be holding a festival to honor a late noted resident; Ever Dreamscape.

"We aimed for mysterious and 'Ever-like,'" E.F. Committee explained to me, "We realized that there were 3 days between the 'Dreamscape 500' on Thursday and Ever's night on Saturday, so decided to make it a festival this year. Three days we think she'd have totally loved. The Bowlathon is for Ever's favorite charity, Child's Play." 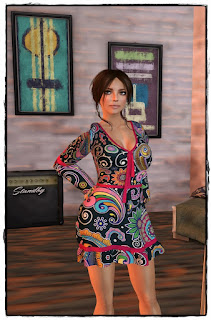 For those who don't know, Ever was a noted part of the Bay City community, who helped organize events. But she was also known for her quirky sense of humor. She would set up many kinds of calamities, but was particularly known for setting fires. In early May 2014, she passed away. Shortly afterwards Bay City honored her in an unusual way by setting much of the city aflame.

Of the earlier teaser messages, "We wanted to build 'mystery' but also get people thinking 'WTF?' We'll type up what each image had to do with Ever, including the links."

The event will include, "random sharks, fires, aliens and Godzillas. We did, with love, when Ever was ever around." Of fires, "that's post party on Ever's Night. Dennis will burn, and we hope most of BC will as well with us. ... We are striving for a very.... ForEver event. She was very unique, it's taking a lot of us to try and even come near" her level."

E.F. Committee concluded, "More details are coming, and everyone is invited. We'll send out LM's in the notecard explaining the posters."

And so, Bay City gets ready to honor one of it's more unique residents in a very unique fashion.