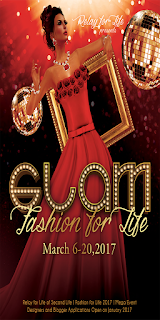 Relay for Life of Second Life announces the first mega event of the 2017 Season, Fashion For Life 2017. The event will take place on March 5th, 2017 and run until midnight on March 19th, 2017. As always 100% of proceeds will be donated to the American Cancer Society.

The goal of the event is to provide an incredible shopping and entertainment experience featuring unique items, runway shows. Lend your support to Relay For Life, the largest and longest charity in Second Life.

This years theme is... Glamorous.
Styles will range from formal to bohemian in a beautiful high fashion glamorous sim.


About Fashion For Life:
Featuring everything Fashion in SL. Another HUGE shopping event to fight cancer. Multiple sims and fabulous builds along with some of SLs best designers, who come together each year to bring fun, fashion and entertainment to the grid! This Relay For Life mega event had its beginning in 2007 when it was called, “the Clothing Fair”.


About Relay For Life of Second Life:

Relay For Life of Second Life is an annual fundraising event that takes place in Second Life in July each year. Volunteers form or join teams to have fun while fundraising and raising awareness from mid-March through mid-July. In July teams build campsites and walk a track, just like a Real World Relay. Since 2005, RFL of SL has raised over $3 million USD for the American Cancer Society.  Since 1985, Relay For Life has become an international movement with over 5,000 Relays being held around the world. As of July 2014, RFL of SL ranks 17 out of 5,000! In fact, RFL of SL is the most global Relay event with teams and volunteers and supporters from more than 90 countries, worldwide.