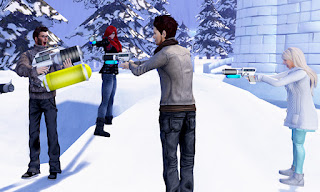 There's no argument that the Lindens do a lot of good, but don't you get the urge sometimes to just throw something at them? Maybe scoop up some snow and pelt them with a few snowballs? Well, today's your chance. From 9AM SL time to 10AM, and again from 1PM SL time to 2PM, Linden Lab will be having one of their snowball fights, or "Snowball Showdown" as they've been calling them lately, with the residents at the Winter Wonderland arena, accessible through Portal Park


Spring Equinox is coming - even if the East Coast of the USA didn’t get the memo - and we can’t properly bid adieu to the chill of the Winter winds without another epic Snowball Fight!

That means it’s time for one last Snowdown Showdown - before the snow melts! Join us this Friday, March 17th from 9:00 to 10:00 AM SLT and 1:00 to 2:00 PM SLT - to enjoy the thrill of the chill and the fun of pummelling one another with tons of virtual snowballs!

Lindens and Residents run amok through the icy castle towers and tunnels, the sky pours snowballs, and the good times roll!

Mark the time and date in your calendars and don’t miss this last chance to enjoy the Snowball Fight Arena before the Winter Wonderland regions come down
The Linden Snowball Fight/Snowball Showdown, has happened about twice a year since December 2015, and no doubt allows for a little fun and/or release of friendly aggression. The teleport to the Winter Wonderland is at the Portal Park area.

For pictures of December's snowball fight, Click Here.
Posted by Bixyl Shuftan at 6:02 AM