Fran Seranade of Creations for Parkinsons 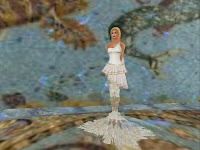 Deaflegacy recently went to Creations for Parkinsons. There she met Barbie Alchemi, who wanted to talk about the person who was the real driving force behind the place in Second Life: her mother Fran Serenade. Fran, who recently turned 90, has been an example of how Second Life can help those with disabilities as despite her Parkinson's, she describes herself as getting better in recent years, attributing the improvement in her well being to Second Life and the friendships she has made there. Her daughter Barbie talked about the Parkinson's Support Group, of which Fran has made a number of friends, and the two birthday parties she had, including one in real life which included some she knew from Second Life.

Read Deaflegacy's story in People.
Posted by Bixyl Shuftan at 6:05 AM