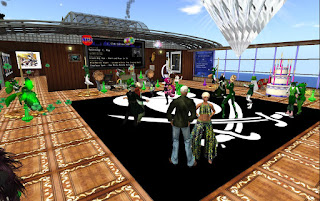 Friday March 17 at 6PM SL time was Team Sunbeamer's first event, the "St. Patty's/Capt'n's Birthday" party. The happening took place at Club Cutlass. Besides the usual crowd in the Sunweaver's airship club, there were a number of notable Relayers showing up such as Trader Whiplash, whom was sporting a shaved head from his "Bid Me Bald" event this week, Arizona Balinger, Bain Finch, Panza Elde, Madonna Daehlie, Oldesoul Eldemar, Gem Sunkiller, and others. 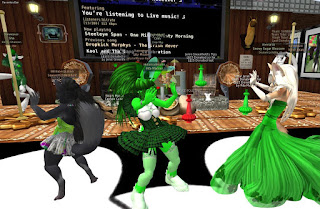 As this was partially a St. Patrick's event, just about everyone except the "Pink Wonder" Marusame Ari showed up either wearing a little green or were all green. The latter included birthday girl Rita Mariner, the team captain of the Sunbeamers, whom in real life was feeling "older than dirt," but still able to dance and misbehave.

Despite having to make some donations just before the Relay season to one of the community members in need, the Sunbeamers had reached about 10,000 Lindens in donations thanks in part to two Bid Me events by Rita Mariner and Ranchan Weidman. But thanks to donations from the Sunbeamers' Relay friends, the total shot past 25,000, the level to reach the "Rising Star" rank and past 30,000. As of the writing of this article, the team has so far raised a total of 35,000 Linden dollars. 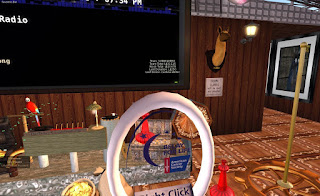 Beamers!  We made Rising Star Level, after our first event, FRI, at Cutlass.  We went from 10K to over 35K in our kiosks, BID MEs kiosks and Vendor.  I am delighted and so proud of all of you that showed up and helped out.  Plus a good time was had by all, with a wide variety of drinking, celtic, etc music provided by DJ CRIM.  Hope we can keep this up and make Bronze next time.

The "Rising Star" rank is a recent one in the Relay for Life in Second Life, having been created as the levels to reach Bronze, Silver, and Gold have been raised over time as a result of the teams' continual successes in fundraising,  and an intermediate rank was needed so smaller and local teams wouldn't feel discouraged. Ranks beyond Gold, such as Platinum, Jade, Diamond, and Purple have also been established.

With this first event, the Sunbeamers have launched themselves into the Relay. Some other top teams, such as Goreans for Life, Team Strange Journey, and the Second Life Cheerleading Squad are also in the Rising Star rank. Already there is one Jade ranked team: Unmasking a Cure. Several teams that hit Gold and Platinum rank last year have yet to reach Rising Star, but will probably do so very soon.